Pursuing a PhD as a non-traditional student: weakness… or superpower?

So, at the young, tender age of 30, I had a revelation: I wanted a career based around math or science. I was then working at my family’s restaurant, helping to run it after working most of my childhood in all manner of positions from doormat/potato peeler to waiter, bartender and eventually maître d’. I loved working at and helping run my family’s restaurant, really loved interacting with the customers, enjoyed working with an able team to get the job done and very much felt a sense of accomplishment in helping run a small business. That being said, I really loved math and science as a high school student and after attempting some college right after high school, I never found my academic footing and went back home after a few years, to work in the family business. After meeting and talking with various patrons that would come in and talk while I was bartending, I noticed the ones that worked as engineers or in science seemed to interest me the most. After telling my girlfriend Erin (and eventual wife) that I wished I went after a science or engineering degree while at college, she said: “why not do it now?”. I was flabbergasted and thought that ship had clearly sailed; but after further consideration, I thought, may as well give it a try!

I decided I wanted to be a mechanical engineer as I found the way turbines worked in automobiles really interesting and thus moved to Maine (seemed like a nice enough place) and lived there for one year to gain residency while taking classes at a community college to try and remember all the high school level math and science I had forgotten after 10+ years. After that year, I applied and was accepted into the mechanical engineering program at the University of Maine at Orono (UMO). My previous academic record was spotty at best with equal amounts of A’s and F’s, but my recent record for the last year was all straight A’s. This was mostly because I now had a single mind and purpose and didn’t care for most of the things that I found important at ages 18-20. Not to mention, after working hard at the restaurant, with 50 to 60 hour weeks, putting in 40-50 hours a week at school seemed like a breeze.

Once I was in the mechanical engineering program at UMO, the work and difficultly was cranked up a bit. Jumping into a math heavy major, that first year felt quite harrowing and scary at times. I often felt like an elephant trying to play a piano or something—how the hell did I get here, what the hell was I thinking, I’m not made for this, etc. This fear proved quite motivating though and I found my work experiences at the restaurant quite helpful. Often times, in the restaurant you get completely overwhelmed with a slew of customers all wanting to eat at the same time, it often feels like a bus unloaded 100 people right into your section and you feel “there is no way I can do this!”. The only way I found to deal with this at the restaurant was to work your butt off and handle one task at a time after some quick prioritizing. Never panic. Well, at UMO, it turned out the same strategy worked for getting overwhelmed with the mechanical engineering program: don’t panic, work your butt off, prioritize the bigger fires and crank through them quickly and efficiently. I realized that yes, the time away made jumping back into academia difficult at first, but I seemed to have real world tools that most of the other younger students didn’t have—I felt like I had an almost unfair advantage.

Using my “real world work skills” in academia helped additionally when it was time to handle arduous problem sets and figuring out complicated concepts. I found that just like the restaurant, team work is the key to handling tough overwhelming issues like this. I found everyone brought different skill sets and approaches to the table and made getting through difficult new concepts easier together. This was particularly true when I started my PhD candidacy at Cornell’s Materials Science department. I felt the same feelings of being completely overwhelmed, but I also noticed many of my fellow students seemed to feel the same way. We quickly bonded together and helped each other go through a first year that had the gigantic scary video game-like end-boss at the end of the year known as the qualifier exam. Since we all came from disparate academic backgrounds we joined together as a team to get through it.

In grad school, it really became apparent that being a non-traditional student was definitely a superpower. I saw other students freak out when sometimes a problem in their academic route would potentially cause a delay in their degree. I never freaked out about that because, hell… I was already delayed by ~15 years, what’s another year in the grand scheme of things! I also had the perspective that comes from working and dealing with the general public for so many years. Sometimes in the restaurant business you get jerks and you have to deal with them and get by as best as possible with a thick skin. This can be an invaluable superpower when dealing with a curmudgeony Prof set in their ways. You just deal with them and move on, no big deal sweating stuff you can’t change… this is something that the 22-year-old me would not be able to have done so easily!

Of course, jumping into a STEM field as a 30-year-old definitely has its difficulties. There is no way around the fact that the beginning is a bit rough as you try and acclimate. There were definitely times when I questioned my decision and how I must have had so much hubris to think I can jump into it after so much time away from academia. Despite that, I generally found working in the “real world” for so many years was really more helpful that not and gave me an unfair advantage or superpower compared to others that followed a more traditional route. I always felt like I was just “playing with house money”, everything seemed like a bonus. As an older adult, I had the luxury that there were no expectations on me by other family members, I just did what I wanted to do for me. Also, the work was certainly physically easier and the hours were about as “bad” as a real-world job, but the work was nicer—no wearing bowties, you set your own hours and there was no back breaking labor.

So if you’re out there thinking that it may be too late for you to pursue a PhD—think again! Sure, it’ll be tough at first, but realize that your life skills can give you an unfair advantage after overcoming the initial acclimation. Of course, everyone’s personal calculus for deciding if they should pursue a PhD at an advanced age comes with all sorts of factors; but if what’s holding you back is your advanced age and being out of the academic game for too long—don’t let it. Embrace your superpower and go for it! 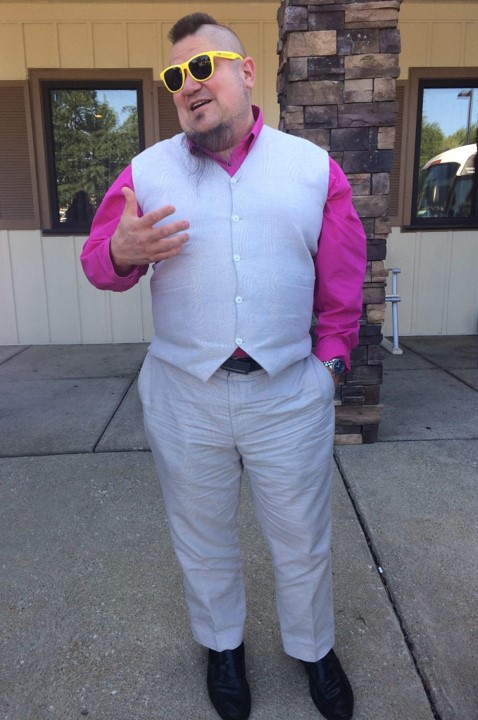 Dr. Luis Estevez is currently a Research Scientist at the University of Dayton Research Institute, working on tunable porous carbon materials for use primarily in energy storage and water treatment applications.